We’ve flew on the wings of love and arrived in Denmark thanks to The Olsen Brothers. They opened the show this year and personally I think that’s the way it should always be. This year’s hosts were, to quote the wonderful Terry Wogan – the Little Mermaid and Doctor Death, oh how I miss Terry. 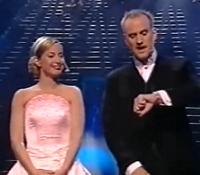 I was excited as usual for the contest but this year I was much more excited for the interval act which was lucky as the entries weren’t all that great in this year. On with the show.

This year’s entry from the United Kingdom was from Lindsay Dracass and was called “No Dream Impossible”. Was this the beginning of the really poor entries from the UK? Yes, I think so. She was singing badly,wearing a track-suit and trainers and had a bad rapper for goodness sake. Here begins years of low quality acts from the UK.

Sweden were back on track this year with an Abba/Steps type medley, Eurovision at it’s finest.

If you ever wanted to see what Elton John would look like if he got up from behind his piano and danced around then check out Latvia’s entry.

Ricky Martin was obviously popular in Spain in this year.

A French entry could sing the guide for the metro underground for all I care, the language and accent is just so amazing when sung by a female in a ballad.

In 2001 Slovenia asked a young Gillian McKeith to stop examining poo, dress up like Uma Thurman from Kill Bill and enter the Eurovision Song Contest for them. To be fair she gave an amazing performance.

In stark contrast to the French accent, when the German entries try to sing a ballad in their language it just sounds wrong.

Another summer night and another good entry from Malta, they have to win one year.

Greece done well this year, maybe they are getting closer to a win.

What a happy song from Denmark this year, not too unlike the eventual winner, it just leaves a big smile on your face.

Now, before the winner – the interval act was the highlight of my year. The one, the only AQUA!

I don’t ever remember Barbie telling Ken to f*** off though.

The winners? Estonia with a song called “Everybody”. An unlikely duo but it worked and it was fun.

Until next time, come on everybody and sing along…