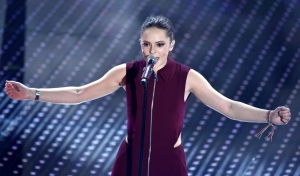 Eurovision 2016 is almost upon us and as the countries begin to reveal their entries let’s start giving them the once-over.

As I will be attending the grand final this year it’s even more super exciting for me!

The Italy song is called “No Degree of Separation” and is performed by Francesca Michielin.

Born in 1995, Francesca studied piano and electric bass as a child. Aged 16, she won Italian X Factor, her single and EP titled Distratto (#1 on iTunes) was certified double platinum. The song was a gift from Elisa, who also worked on the artistic direction of Riflessi di Me, Francesca’s debut album.
Released in 2013, Cigno Nero, was a double-platinum duet with rapper Fedez. They also recorded Magnifico (five times platinum). In 2014, she wrote and sang Amazing, on The Amazing Spider-Man 2 soundtrack. In 2015, she released di20 followed by Nice to Meet You: a musical autobiography that she toured solo in clubs playing keyboards, guitar, electric bass, kettle drum, and TC-Helicon.

In 2016, Francesca came second at Sanremo with Nessun Grado di Separazione (#1 on iTunes and radio charts, Festival’s most popular song on Spotify with more than 1 million streams). The video already has 5 million views. The track is from her new album di20are, which debuted at #1 on iTunes and is a bestselling album in Italy.

Michielin explained the lyrical content of “Nessun grado di separazione” in several interviews, claiming that the song is inspired by the six degrees of separation theory and contains the message that, “despite all of the cultural differences, there shouldn’t be distances between people”. Particularly, the composition’s verses, biographical and introspective, tell the story of “a girl who lives in a drawer […] together with all her crumpled dreams, and who, at a certain point, finds the courage to come out from that shelter to face the true life”, with the will to open herself to the outside world, overcoming fears and preconceptions.

Michielin also added that she recorded background vocals for the track on the same day of the November 2015 Paris attacks, therefore she was furthermore inspired to reflect on the song’s lyrics and on “all the barriers that exist between people, while the truth is that we are all human beings with dreams and hopes”.

Performed in her own language so this is already pleasing me. It’s a semi-ballad and she delivers a very powerful/beautiful performance which is also very visual. I love her voice, she is very under-stated and I actually really like the song.

I think I have just listened to a potential winner here!

“It’s the first time it’s happened to me
Before, I just used to shut myself in
Keeping my distance from life and its stuff
Because I’d never felt it so deep down
And then I felt an emotion flare up quickly
And push its way into my heart without turning down its voice
And I feel no tension, only life inside me

There’s no degree of separation

I had less time for my heart and more for my mind
Always one step behind and my soul on high alert
and I watched the world from a door
never completely open, from a distance
and no, there’s no hesitation now inside me

No degree of separation
in this universe on the move

What do you think? Let me know in the comments below or tweet me @popandtalk and keep me from going Eurovision mad!