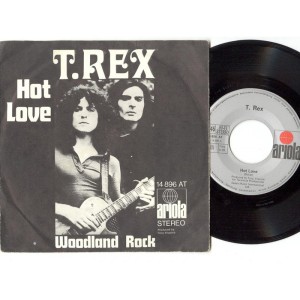 Last week we featured the hirsute Mungo Jerry and Baby Jump. This week we witness the birth of glam rock. Up until then, the bands just came on stage with suits (The Beatles) or as in the case of the Rolling Stones (tight pants). Marc Bolan then comes on in satin pants during The Top of the Pops – and glitter on his face.

“Hot Love” is a song by English glam rock act T. Rex, released as a standalone single on 12 February 1971 by record label Fly. It was the group’s first number one placing on the UK Singles Chart, where it remained at the top for six weeks beginning on 20th March 1971.

The two performances of the song in March 1971 on Top of the Pops, which saw Bolan dressed for the first time in shiny satin stagewear and glittery make-up (the latter at the suggestion of his stylist Chelita Secunda) were a crucial trigger for the glam rock movement.

The music is also softer as well. Geared to the women around the world. I remember this well. It was another song I would sing along to when it came on the radio.

Now, when I read the lyrics I think – what the……

I really think that it was a case of lets see what rhymes with witch. Oh, twitch is a good one. We were still too conservative for another word I could think of. Don’t you just dig those girls dancing in the front. A little too much gratuitous flesh writhing around in the front, rather distracting from the glitter on Marc’s face. Or maybe they are just twitching.

So what was number one in New Zealand at the time. Well we had this:

And then the quaint The Mixtures with the Pushbike Song which made it to number two in the Uk. Not bad for an Aussie group. This video was filmed in Melbourne but could have been in Auckland as well.

So it is Back to the future for me,