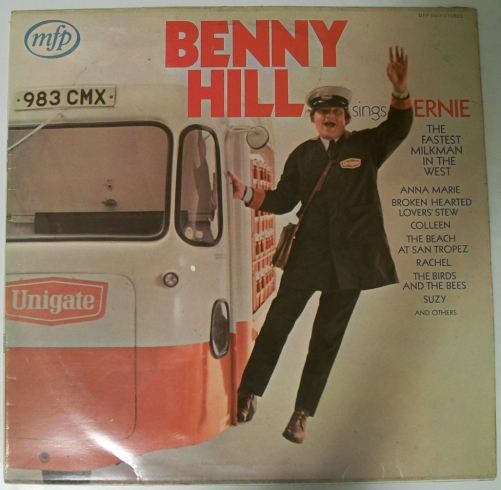 “Ernie (The Fastest Milkman In The West)” by Benny Hill was Number One on 13th November 1971 and stayed there for four weeks.

We are now at the end of 1971. This year has just flown past as a lot of the hits were number one for several weeks. This Christmas hit spent 4 weeks at the top.

I used to love watching Benny Hill, he was a firm favourite down under here in New Zealand. We just loved his innuendos and naughty winks. And his cheesy grin.

What I am finding interesting is the backgrounds of the songs when I research for these posts.

Benny Hill was really a milkman in his earlier life and this song was based on his experiences.

Story line
The lyric’s story line is inspired by Hill’s early experience as a milkman for Hann’s Dairies in Eastleigh, Hampshire. Market Street, mentioned in the lyrics, is an actual road in Eastleigh. The song tells the fictional exploits of Ernie Price, a 52-year-old (68, in the original television version) milkman who drives a horse–drawn milk cart. It relates his war with the bread delivery man (two ton Ted from Teddington) and their efforts to win the heart of Sue, a widow who lives on her own at No. 22, Linley Lane.

When Ted sees Ernie’s cart outside Sue’s house all afternoon, he becomes enraged and violently kicks Price’s horse, Trigger. The two men resort to a duel, using the wares they carry on their respective carts, and Ernie is killed by a rock cake underneath his heart, followed by a stale pork pie in his eye (a fresh meat pie in the original television version).

Sue and Ted then marry, but Ernie’s ghost returns to haunt them on their wedding night.

Even now I still get a laugh watching the video, or maybe it is the nostalgia about the old glass milk bottles with the gold tops. Our milk bottles in New Zealand were silver top for normal milk, green tops for skim milk and red for cream. Those were the days.

History
“Ernie” was originally written in 1955 as the introduction to an unfilmed screenplay about Hill’s milkman experiences.

Hill performed the song on The Benny Hill Show in 1970. The original clip is seldom repeated as it was made in black and white owing to a technicians’ strike, but the episode has been released on DVD, in both the United Kingdom and United States.

In the original television broadcast version, as part of the song’s comedy plot, Benny incorrectly sings the name “Ernie” several times as: “Hernie”, to which the backing singers would correct him, by strongly replying the name as: “Ernie!”. To this, Benny would then pull an embarrassed/annoyed face. This comedy plot was concluded at the end of the song when Benny, pulling a mischievous face, sang a final: “Hernie!”. On the record release, only the final: “Hernie!” is heard.

The following year, it was included with minor lyrical revisions on Hill’s album Words and Music. When it was released as a single on EMI’s Columbia label, it became a surprise number-one hit, topping the UK Singles Chart for four weeks at Christmas 1971. A promotional film was shot starring Hill as Ernie, Henry McGee as Ted, and Jan Butlin as Sue.

Hill re-recorded the song shortly before his death in 1992 for the album Benny Hill… The Best Of.

So what was number one here in New Zealand – well we were still enjoying Paul McCartney and Wings with Uncle Albert/Admiral Halsey. But I remember Ernie as being very popular too.

So it is back to the future.

Do you remember these songs? Let me know in the comments below or tweet me @PopAndTalk

The Talk About Pop Music Every UK Number One is now on Spotify. Relive, enjoy and share every song featured up until the latest post…