It’s not often someone from my home town of Norwich gets into the charts. First there was Cathy Dennis, then Beth Orton, and in the last three years, 25 year old DJ and producer Bruce Fielder aka Sigala. So it’s refreshing to see a local lad doing well and keeping the East Anglian music flame burning ‘bright’.

It was in 2015 that Sigala first came to prominence with his anthem “Easy Love” that topped the UK singles chart and proved successful across Europe and in Australia too, selling over a million copies in the process.

He followed “Easy Love” with a string of dance smash hits including “Sweet Lovin” with Bryn Christopher, “Give Me Your Love” with John Newman and Nile Rodgers, and “Came Here For Love” with Ella Eyre.

In 2018 he co-wrote (with Jess Glynne) and produced “Lullaby” with vocals provided by Paloma Faith, which has taken the charts by storm across much of the globe. 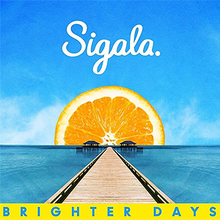 And then there’s THAT collaboration with a certain Australian megastar! We’ve been given a sneak preview on Instagram, but will it make the album? Will it be released as a single?
We can only hope and pray…!